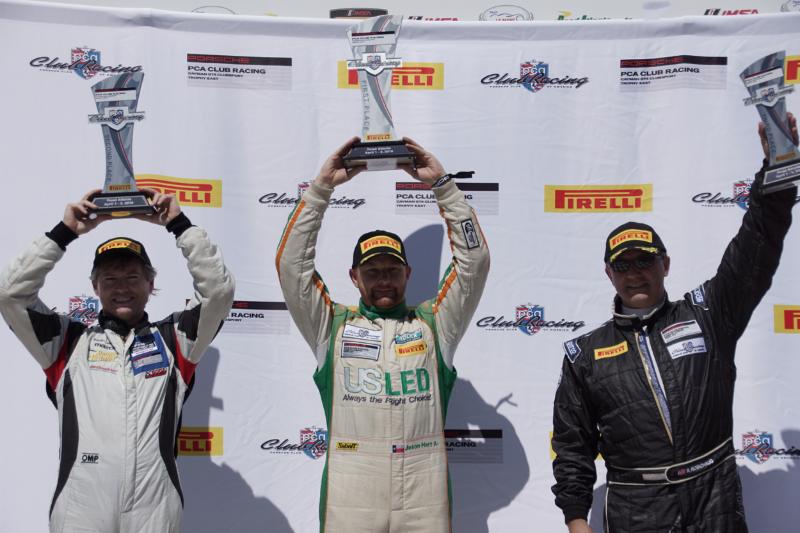 Jason Hart led from flag to flag in both races – which had no yellow flags in either event – to claim the dual victories in the No. 47 NOLAsport Cayman GT4 Clubsport.

The races marked a new beginning as the first spec series for the Cayman GT4 Clubsport and as PCA’s new semi-professional racing series.

The car has been in development for nearly a year. Each of the 20 Cayman GT4 Clubsport cars on track this weekend were tested by a team from Porsche Motorsport at the legendary Nürburgring in Germany.

The Porsche Cayman GT4 Clubsport is a 385-horsepower, mid-engine racer, which features a sealed engine and transmission and a spec Pirelli tire. It is Porsche’s first mid-engine race car.

He led the 16-lap sprint by as much as 13.706 seconds before taking a 13.5-second victory in his US LED-sponsored NOLAsport Cayman GT4 Clubsport over David Baum, representing Western Michigan PCA Region in the No. 24 Autometrics Cayman GT4 Clubsport.

“The car is really good,” Hart said. “We’re very happy with how it was delivered as-is from Porsche. We’re just making small millimeter tweaks here and there to get the balance where we want it. The races were great today.”

Baum started sixth in the field and meticulously climbed his way into second position. Rene Robichaud, from the Ohio Valley PCA Region, finished third overall in the No. 89 Kelly-Moss Road and Race Porsche.

Robichaud also was the top Masters Class competitor, a division for racers age 57 or older.