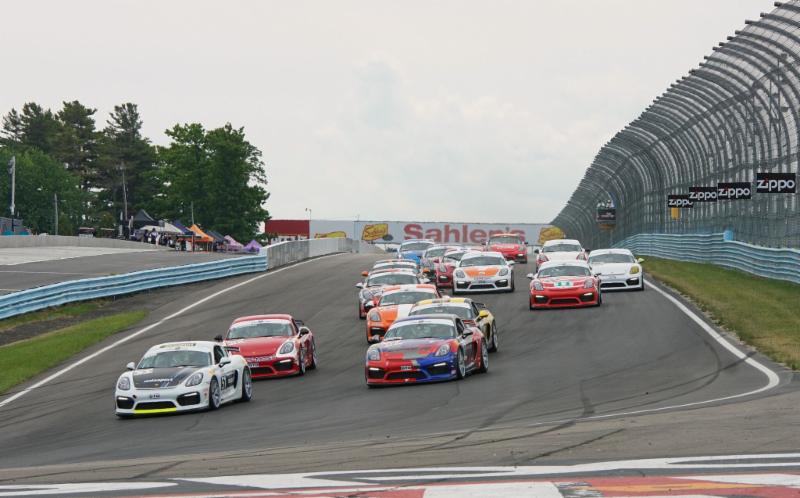 Keith Jensen, representing the Maverick PCA Region in the No. 51 NOLAsport Porsche Cayman GT4 Clubsport, won both sprint races with a fastest lap time of 1 minute and 59.404 seconds. Jensen was the only driver in the series to complete a lap in under two minutes.

Drivers raced on the brand-new track asphalt at WGI after a massive repaving project was completed in mid-April.

Jensen started the race on pole and led Sprint 1 from flag to flag, taking the victory by 20.427 seconds. Jensen, who swept all three races at NOLA Motorsports Park in April, credited his win to his team, coach Jason Hart and his Porsche Cayman GT4 Clubsport.

Following his fourth-place finish in the endurance race at NOLA, Adam Merzon, representing the Connecticut Valley PCA Region, started in second and finished on the podium for the first time this year in second place with his No. 7 DeMan Motorsport Porsche.

Rounding out the overall podium in third was Rene Robichaud, representing the Ohio Valley PCA Region in the No. 89 Kelly-Moss Road and Race Cayman GT4 Clubsport. Robichaud also took first in the Masters Class, which is designated for drivers ages 57 and older.

The battle for second and third for the Championship Podium was close, with Merzon beating Robichaud by just .549 seconds.

“It was a good battle – qualifying matters,” Merzon said. “I was battling a little close (with Rene Robichaud) but he never got along beside me.”

Curt Swearingin, representing the Tennessee PCA Region, started in seventh in his No. 18 Advanced Collision Porsche, but rapidly moved up through the field to land in fourth place, just shy of a podium finish.

In the Masters Class, John Frank, from the Connecticut Valley PCA Region, finished second in the No. 11 DeMan Motorsports Porsche. David Walker, representing the Maverick PCA Region, came in third in the No. 28 TOPP Racing entry.

Walker, who shares a car with his son, Russell Walker, showed plenty of excitement and enthusiasm about Watkins Glen’s iconic circuit during podium.

“It’s my first time to this track and when I first saw it, I go ‘This is a real race track!'” Walker said. “So, it’s been a real learning progression here.”

For the second sprint race of the day, the grid was set by fastest lap time from Sprint 1. Jensen, Merzon, Robichaud, Swearingin and David Baum, of the Western Michigan PCA Region, started in the top five, respectively.

Jensen and Robichaud battled for first place, with Robichaud leading early in the race. However, Jensen progressively extended his lead throughout the 15-lap race and built a gap over the rest of the field to take a 16.462-second victory over Robichaud.

Merzon started the race in second, but finished third overall.

“Rene (Robichaud) and I were right there. I was waiting for the one mistake, but he didn’t make it,” Merzon said.

“But a very clean and great race. The two of us were glued together from the start to the finish. If I could have just gone over them (Jensen and Robichaud) when they were going neck-and-neck and side-by-side. I was rolling up on them hard but I just couldn’t get through them. It was a good battle to watch.”

In the Masters Class, Robichaud repeated his first place finish followed by two new podium finishers – Ed Lane and Roger Halvorsen, second and third, respectively. Lane, representing the Florida Crown PCA Region in the No. 66 Autometrics Motorsports, finished in front of Halvorsen, driving the No. 23 Mustante Motorsports Porsche, by 2.365 seconds.

The third and final race of the weekend will be an 80-minute endurance race starting at 4:30 p.m. (ET) Sunday, June 5.

Due to the success of the series, a limited number of  Cayman GT4 Clubsport cars have become available for immediate purchase. Interested parties should contact Allen Shirley, GT4 Clubsport Trophy East Series coordinator and PCA national steward, at (904) 338-2324 for more information.

KEITH JENSEN (No. 51 NOLAsport, winner): “It’s a good redemption for me. I had a rough weekend out at Watkins Glen about three weekends ago – I picked the wrong tires. It’s good to come back here and have a significantly different result. I’m glad to be back at Watkins Glen, it’s a great organization. Thanks to NOLAsport and my coach, Jason Hart.”

ADAM MERZON (No. 7 DeMan Motorsport, second): “It feels great. Finally, three races in, I’m on podium. It was a good battle – qualifying matters. I was battling a little close (with Rene Robichaud) but he never got along beside me. I’m going to hope my quickest lap time was faster than Rene’s (Robichaud) time so I can start ahead of him in Sprint 2.”

RENE ROBICHAUD (No. 89 Kelly-Moss Road and Race, third, plus first Masters): “Today was much better than qualifying. My times came down nicely. I feel like I am really starting to get to know the track and the car and the new surface and it just felt great. I was closing in on P2 the whole race, but I just didn’t find a big enough hole to get to the second step (on the podium).”

JOHN FRANK (No. 11 DeMan Motorsport, second Masters): “It’s great to be at the newly repaved Watkins Glen with Porsche Cayman Clubsport. I’m thrilled to be here. I’m going to try to do a little bit better in the start and not fall so far behind and let so many cars pass me in the beginning of the race.”

DAVID WALKER (No. 28 TOPP Racing, third Masters): “It’s my first time to this track and when I first saw it, I go ‘This is a real race track!’ So it’s been a real learning progression here. My son (Russell Walker) coached me up again last night and it put me up on the podium, so it was a fantastic race. I can’t wait for the next one!”

KEITH JENSEN (No. 51 NOLAsport, winner): “Rene (Robichaud) put on a great race. He’s a great driver and I have had a lot of fun racing against him, at Road Atlanta in particular we had a great race. We both trusted each other. We probably went three laps side-by-side through every single corner and we were frequently within inches, and sometimes a little less than inches of each other at very high rates of speed. It was a great deal of fun and I was happy to finally get a run on him and it was a great race.”

RENE ROBICHAUD (No. 89 Kelly-Moss Road and Race, second, plus first Masters): “Today was just a great day. Two podiums overall. Second and third. Two first place finishes in the Masters class. I want to thank the Porsche Club and Porsche Motorsports, Porsche Cars, Kelly Moss, my daughter Nicole who came in sixth place.  She and I are having the most fun! In third place in Sprint 1 I was on the bumper of P2, but I just never found a clean pass and so I just had to accept P3. But my fastest lap in Sprint 1 got me up to second position for Sprint 2 and I was able to hold it.”

ADAM MERZON (No. 7 DeMan Motorsport, third): “It was a good race! Rene (Robichaud) and I were right there. I was waiting for the one mistake, but he didn’t make it. But a very clean and great race. I don’t know if anyone else was battling but the two of us were glued together from the start to finish. If I could have just gone over them (Jensen and Robichaud) when they were going neck-and-neck and side-by-side. I was rolling up on them hard but I just couldn’t get through them. It was a good battle to watch. You should see my in-car video!”

ROGER HALVORSEN (No. 23 Musante Motorsports, third Masters): “It took me awhile to get up to speed in this session but we just built a lot of confidence between the last sprint race and this one and thanks to my crew and my coach Peter Krauss we had some intense conversations and he really lit a fire under my butt to get out there and change it. (Looking ahead to VIR) VIR is a track I haven’t been to, so we are going to be there for a few days testing the car, getting the right set-up and hopefully we can be back with one of these (holding his trophy).”