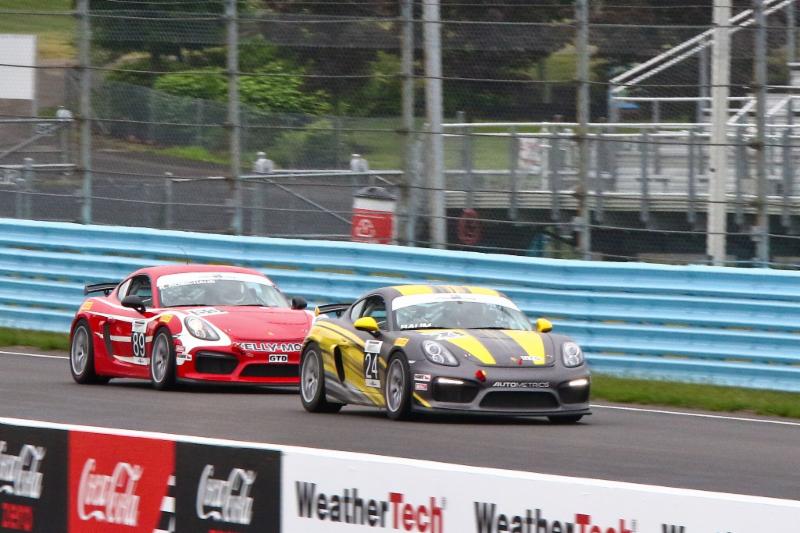 DANVILLE, Va. (June 20, 2016) – The PCA Club Racing Porsche Cayman GT4 Clubsport Trophy East series drivers are fresh from their recent Watkins Glen International race weekend and ready to take on their fourth event of the season June 24-26 at VIRginia International Raceway (VIR).
Rene Robichaud, representing the Ohio Valley PCA Region, earned an exciting, last-lap victory in the endurance race June 5 at Watkins Glen in the No. 89 Kelly-Moss Road and Race Cayman GT4 Clubsport. He is aiming for more trophies at VIR.
“I have raced at VIR several times, and I love the big, flowing track,” Robichaud said. “The S curves there are a great challenge.”
The 3.27-mile, 17-turn track is located just north of the Virginia and North Carolina state line. The average temperature in June is usually upward of 85 degrees, which can be tough on drivers – especially during the 80-minute endurance race.
“The only issue I’ve found at VIR is sometimes it gets hot in late June, so everyone needs to stay hydrated,” Robichaud said.
Robichaud’s daughter, Nicole Robichaud, who drives the No. 90 Kelly-Moss Road and Race Porsche entry, is also looking forward to VIR this weekend. But she and her dad have different goals in mind.
“Nicole has improved a great deal in her first year of racing,” Robichaud said. “I’m just delighted with her progress. She’s so enthusiastic and loves to talk to all the drivers, and they really do give her a lot of pointers.”
Nicole, the sole female driver in the GT4 Clubsport Trophy East series, placed sixth in the endurance event at Watkins Glen.
“I’m just glad she broke in the top 10 – that was our goal by the end of the year,” Robichaud said. “I would love for her to break into the top five at VIR.”
Watkins Glen polesitter Keith Jensen, representing the Maverick PCA Region, will be back in action after his No. 51 NOLAsport Porsche Cayman GT4 Clubsport went off track and hit a tire barrier on Lap 17 of the endurance race. He was forced to retire from the race but is looking to reach the top step of the podium at VIR after sweeping the competition at NOLA Motorsports Park and winning both sprints at Watkins Glen.
The event at VIR will feature three races in an exciting, varied format relative to PCA Club Racing standards. The first and second races will be 30-minute sprint races. The third race is an endurance race lasting 80 minutes.
There will be three practice sessions Friday, June 24. The qualifying session at 10:50 a.m (ET) Saturday, June 25 will set the grid for the first 30-minute sprint race, which starts at 2:10 p.m. The second 30-minute sprint follows at 4:45 p.m. The 80-minute endurance race will start at 1:45 p.m. Sunday, June 26.
Championship and Masters competitors will receive points based on finish in their respective divisions, with podium recognition for each of the top three drivers.
About the author