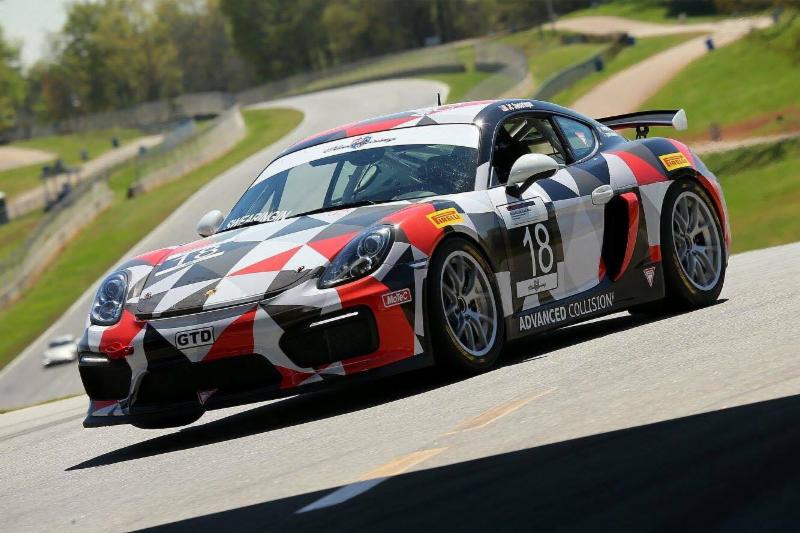 COLUMBIA, Md. (August 23, 2016)  –  Although Curt Swearingin is new to the PCA Club Racing scene, he has wasted little time finding the podium in the Cayman GT4 Clubsport Trophy East series.

Swearingin, who represents the Tennessee PCA Region, earned his first podium finishes of the inaugural season of the Porsche Club of America (PCA) series in June at VIRginia International Raceway (VIR). He placed third in his No. 18 Advanced Collision Porsche entry after passing fellow competitors David Baum and Rene Robichaud on VIR’s 3.27-mile, 17-turn track.

Swearingin, from Chattanooga, Tennessee, also competes in endurance races in the World Racing League. But the spec nature of the Clubsport series appealed to him.

“I like that the cars are all equal in Clubsport,” Swearingin said. “In these races, you’re going to get beat by another driver – not another car. I wanted to race against an equal car. That’s why I got into the series, and I love the challenge of it.

“A lot of the guys out there have raced a ton, but I’m one of the least-experienced guys in PCA. I feel like we’re doing pretty well for the experience level that we’re at, though.”

Swearingin, a Tennessee PCA Region member for five years, is a huge Porsche enthusiast. He has three Porsche street cars at home – a 2016 911 GT3 RS, a Cayenne Turbo S (his wife’s car) and a Panamera GTS that he drives daily.

“My son wants to be able to race one day, too, so he’s big into it,” Swearingin said. “I think we’re on board as a Porsche family!”

Swearingin has been immersed in the automotive world for years. He owns six collision centers around the Chattanooga area that specialize in repairs of high-end car brands, including Porsche, Mercedes-Benz, Jaguar, BMW and more.

“During my childhood, I always loved cars, but I never did any racing until about two years ago,” Swearingin said. “I did some high-performance driving events on a track, but I was getting a little bored with that, so then I decided to take it to the next level.”

“It really helped me learn and accelerate my racing skills,” Swearingin said. “It gave me a great foundation. Anyone that hasn’t done one should do some type of driving school.”

This season, Swearingin has enjoyed getting to know the other drivers and the camaraderie at events throughout the year in the Cayman GT4 Clubsport Trophy East series.

“I especially love the Rene and Nicole Robichaud father/daughter story,” he said. “I have real respect for them. I’m always cheering for Nicole. I look at her like I would my own son who wants to race someday – unless she’s trying to pass me, then never mind!”

Swearingin’s other hobbies include boating and water skiing with his wife and two kids, ages 13 and 11.

Next up for Swearingin and the Cayman GT4 Clubsport Trophy East series is an event weekend Sept. 2-4 at Road America in Elkhart Lake, Wisconsin, where he’s looking to gain more podiums and points.

“All these guys are quick,” Swearingin said. “(Keith) Jensen, (Adam) Merzon, (David) Baum – they all helped elevate my game. They have more experience than I do, but I’m looking forward to competing with them on their level.”