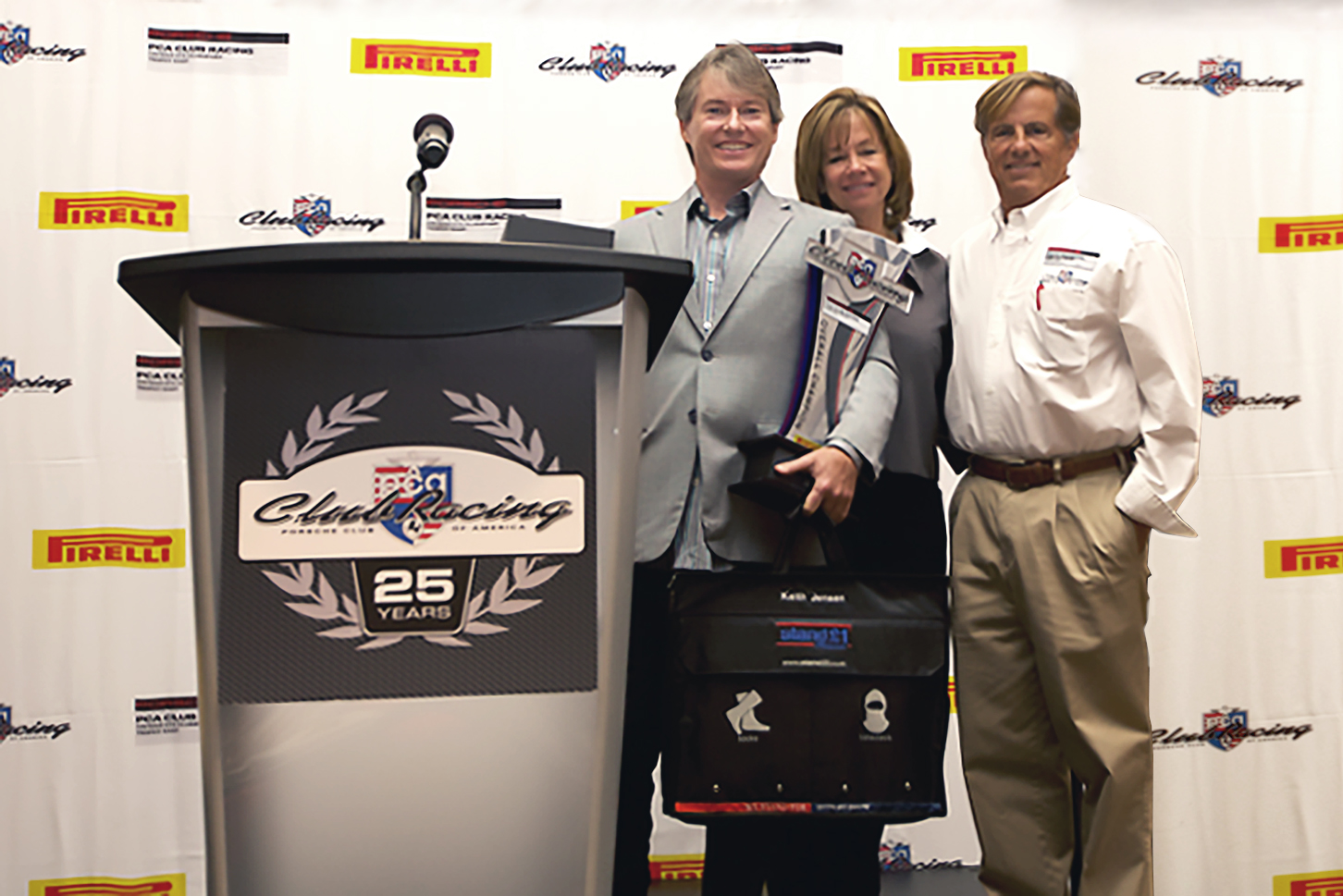 “What a fabulous end to an outstanding year,” Jensen said. “Shortly after I completed my first race in January 2015, I heard rumors of a dedicated Porsche-engineered Cayman race car. I was excited by the prospect of what I hoped would be the most competitive racing PCA offered.

“With the PCA Club Racing Porsche Cayman GT4 Clubsport Trophy East series, I got all that I had hoped for and more. What an awesome bunch of racers – uber-competitive, fair, respectful and fun.

“I want to thank my driving coach, Jason Hart, as I’m certain I would not have been as fast without him. Also, Jon Scheurich, owner of NOLAsport, and my crew, Ben Cain and James Riemens, have been awesome to work with all year.”

Jensen built his strong championship margin by winning 12 of the 18 races this season. He swept the sprint races at four of the six events, and also won three of the six endurance races, with victories at NOLA Motorsports Park, VIRginia International Raceway and Road America. Curt Swearingin, who represents the Tennessee PCA Region, rounded out the top three in the Championship class standings this season with 176 points. Swearingin ended up in the top three after a thrilling, season finale endurance race at Daytona when he passed Baum in the last lap of the 80-minute race to earn his first win of the season.

In the Masters class, Robichaud, representing the Ohio Valley PCA Region in the No. 89 Kelly-Moss Road and Race Cayman GT4 Clubsport, led the Masters standings, 169-153, over Roger Halvorsen. “I’m very thankful for being the Masters class champion this year,” Robichaud said. “It’s been a heck of a ride. Racing is so much fun, but it has its moments of frustration. Thankfully, I managed to squeak it out and get enough points to win the Masters class.”

Halvorsen, representing the Connecticut Valley Region, had a great weekend at the 2016 season finale after winning his first Championship class title of the season and sweeping both sprints for the Masters class at Daytona.

John Frank, also representing the Connecticut Valley Region, rounded out the Masters class in third with 136 points. Frank swept both sprint races and the endurance race in June at VIRginia International Raceway.

Masters champion Robichaud was at the center of one of the season’s most exciting races. He passed Baum on the final lap for victory in the endurance race in June at Watkins Glen International, sweeping the Championship and Masters classes with one bold move.

“I had a first, second and third Championship class podiums and three Masters class wins at Watkins Glen,” Robichaud said. “At Road Atlanta, I had three third-place finishes overall and three wins in the Masters class, so I was starting off the year leading in points. We had some issues at VIR, but that’s how racing goes, and we made it back. There’s something to be said about perseverance!”

Two exciting season finale prizes were presented to the Championship and Masters class winners at the event. Stand 21 Racewear, an industry leader in custom head-to-toe, made-to-measure safety wear for drivers, presented drivers’ suits to both Jensen and Robichaud. Porsche Design also presented the series champions with an exclusive titanium timepiece from the new Porsche Design “1919 Collection” – designed and manufactured by the Porsche Design Timepieces AG in Switzerland. The watches were customized with the GT4 Clubsport logo embossed on the back. A third award – the Spirit of Excellence – was presented to Swearingin at the 2016 Championship Celebration. The award honors a driver who embodies the values of Porsche Club of America. Swearingin was a class act throughout the season and a consistent, positive force within the series.

“We would like to thank our sponsors – Pirelli, Porsche Design and Stand 21 Racewear – for all of the support during our inaugural season,” said Vicki Earnshaw, PCA Club Racing chair. “Even though the season is just ending, we are already excited to kick off our 2017 season with new drivers and race venues.”

The series traveled to six events in 2016 but will expand to eight events in 2017, including three new tracks for the Clubsport drivers. Prestigious tracks that will join the lineup next year include Canadian Tire Motorsport Park in Ontario, Barber Motorsports Park in Alabama and Monticello Raceway in New York.

“An impressive first season of the PCA Club Racing Porsche Cayman GT4 Clubsport Trophy East Series is now behind us,” said Owen Hayes, Director of Operations for Porsche Motorsport North America. “Having the Porsche Club of America o
versee the series has proven to be a great fit. With a more ambitious 2017 schedule and the updated Cayman GT4 Clubsport MR, the sophomore season promises even closer, more spirited competition.”

“Vicki Earnshaw, Allen Shirley, Bryan Henderson and David Murry have done an absolutely fantastic job this year,” Jensen said. “They are so giving of their time and talents, and all are an absolute pleasure to work with. They deserve huge kudos for the success of this series.”