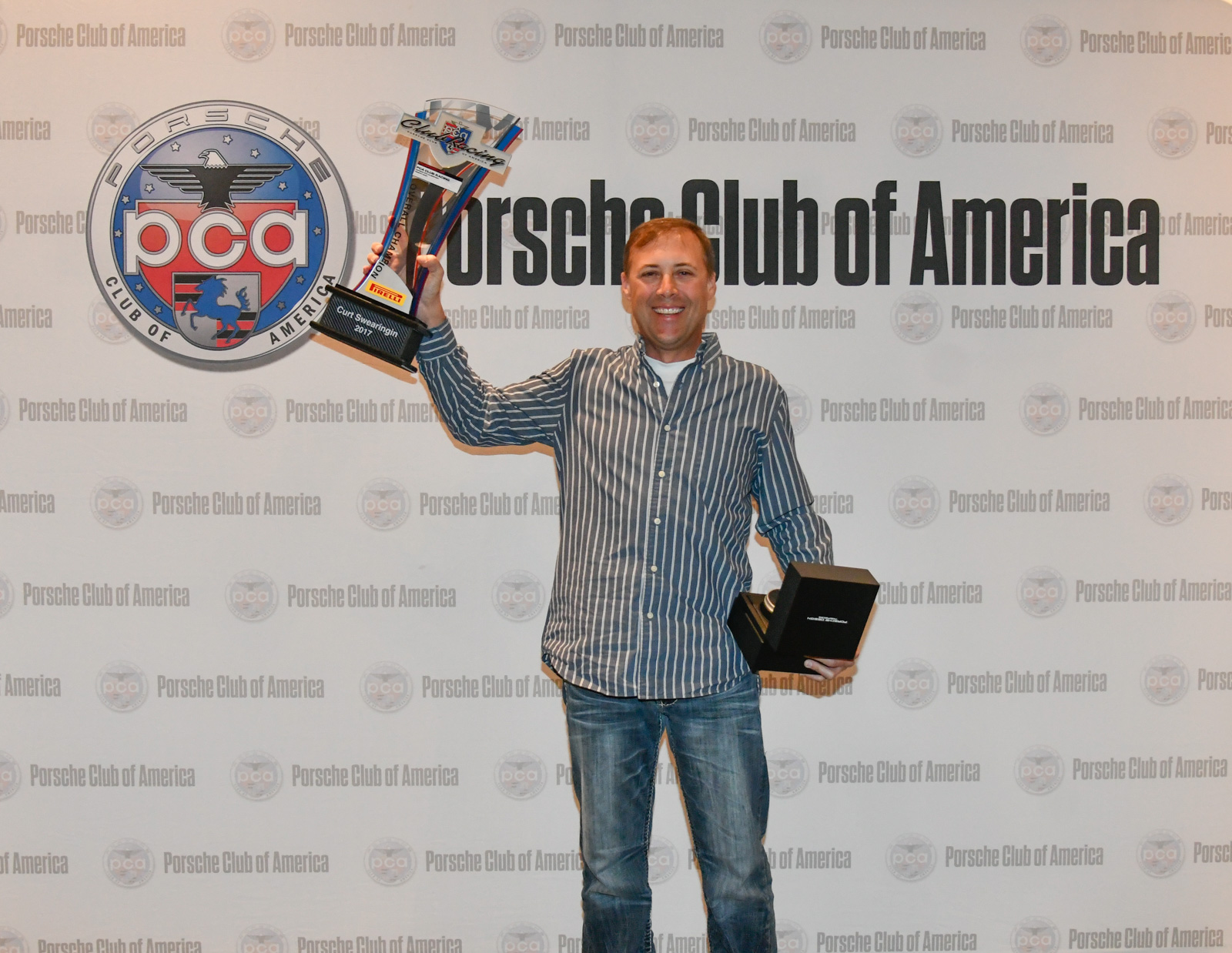 “I would like to thank my wife Shawnan and my two children – Collin and Layne – for giving me the time away to do what I love,” Swearingin said. “There are so many special people that support me in racing, my employees at Advanced Collision Inc. (ACI) who handle the day-to-day activities, my CFO Karen Lowe who has had to take up so much extra work while I’m away racing, the ACI Motorsports crew, John Memmer and Austin Henry, who handle the racing events, my pro coach Cass Whitehead who shows me the fast way around the track, my teammates who are always pulling for an ACI victory, my friends and the Tennessee Region PCA who are always cheering me on. Thanks also to Porsche of Chattanooga for their support, PCA staff, LST Marketing, MoTeC Joe, and Porsche, plus the series sponsors Porsche Design and Pirelli.”

Swearingin started racing in the series in 2016 and finished in third place in the Championship class before taking home the big prize this season.

“When the 2016 season concluded, ACI Motorsports and I went to work,” he said. “The goal was set that we would win the 2017 season convincingly. The ACI Motorsports team has been outstanding. They are probably the youngest in the paddock, and they focused on the car and preparing to compete in their first season, all while we were purchasing a rig, equipment, tools and all things necessary to support race cars.

NOLAsport’s Alejandro Galindo, who represents the Mardi Gras PCA Region, rounded out the top three in the Championship class standings this season with 288 points.

In the Masters class, Charlie Craig, representing the Connecticut Valley PCA Region in the No. 76 Autometrics Motorsports Cayman GT4 Clubsport, was crowned the champion. He led the Masters standings, 195-184, overJohn Crosby, representing the Mardi Gras PCA Region.
“Being able to compete in the Masters Class-where I had my only chance of being competitive -is the best, and, perhaps, the only positive of getting old,” Craig said. “My heartfelt thanks go to Cory Friedman of Autometrics for teaching me how to race both offensively and defensively (and no that doesn’t mean blocking!) and Brian Grossman of Autometrics for always setting up my car perfectly. Even when I destroyed the front end in the Saturday morning race at VIR, Brian had ‘Old Glory’ ready for the Saturday afternoon race!

“Also thanks to Vicki Earnshaw, West Dillard and all of the other volunteers for giving up family vacations – and their own racing – to enable PCA Club Racing to thrive, all of the consultants – David Murry, MoTeC Joe, Kate Taylor and the other publicists, the Porsche techs and the Pirelli techs whom are world-class at what they do. Plus, thanks to all of the sponsors, especially JX2 for awarding me free tires, and to John Crosby and John Frank for not racing more than they did!”

Kathy Mead, representing the Hill Country PCA Valley Region, rounded out the Masters class in third with 148 points. 2017 marked Mead’s first year with the series, and she was the sole female competitor.

The series’ prestigious Spirit of Excellence award was presented to Autometrics’ Baum this year. This award honors a driver who embodies the values of Porsche Club of America. Baum – who always had a smile on his face, win or lose – was a class act throughout the season and a consistent, positive force within the series.

Series sponsor Porsche Design provided an exciting season finale prize to the Championship and Masters class winners at the event. Swearingin and Craig received exclusive titanium timepieces that were both customized with the GT4 Clubsport logo embossed on the back. In addition, Swearingin and Craig will also be receiving custom made driver suits from Adidas courtesy of PCA Club Racing.

“Anyone that is considering entering this series in 2018 should know that this is a family,” Swearingin said. “The PCA staff, competitors and sponsors are some of the best people you will ever meet. I’m so fortunate to have had the last two seasons with all of them. I have so many new lifetime friends from joining this family.”

Swearingin plans to add a new teammate to his ACI Motorsports roster next year, and he will be racing his 991.1 GT3 Cup car alongside the Clubsports for the 2018 season.

“Congratulations to our 2017 GT4 Trophy East Series winners,” said Vicki Earnshaw, PCA Club Racing chair. “This season resulted in great improvement in our drivers’ speed and racecraft. The competition in eight events with fields of around 18 Clubsport cars gave them close competition. Our generous support from our partners allowed PCA Club Racing to have a rewarding season and we thank you. We also thank the teams, drivers and our PCA Club Racing volunteer staff for their support.”

“The only negative is that the 2018 Trophy East Series doesn’t start sooner!” Craig said.