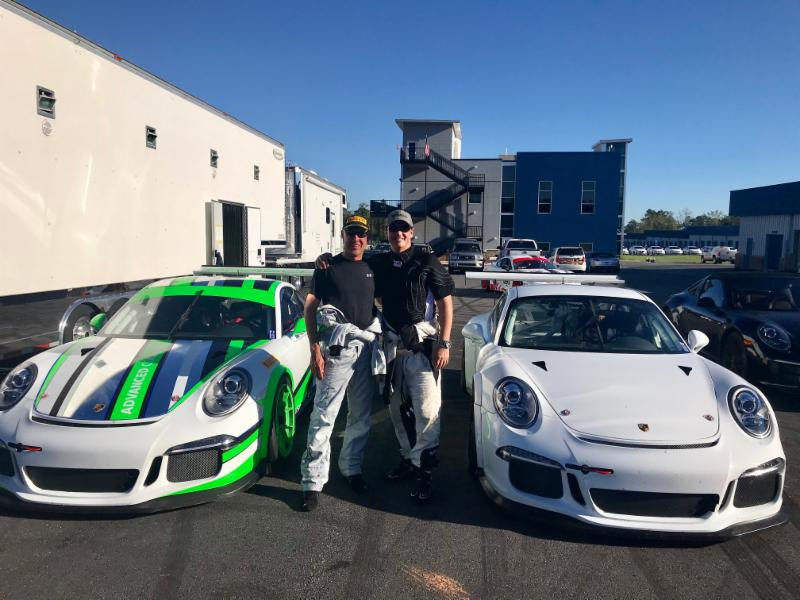 In 2014, Edge got his first 991 GT3 and spent the next three years getting his car on track wherever and whenever he could, while gaining valuable lessons from instructors and friends alike along the way.

In 2018, Edge will have his first career start in the semi-professional PCA Club Racing Trophy East Series.

When Edge met fellow PCA Club Racing Trophy East Series competitor and 2017 Champion Curt Swearingin, he had completed more than 10,000 miles at tracks across the country. Swearingin was in the middle of putting together his team – Advanced Collision Inc. (ACI) Motorsports – and Edge was quickly learning the appeal of showing up at the track and driving.

“Like many PCA enthusiasts, I liked to trailer my GT3 and change my own pads, rotors, and tires; however, my proficiency was certainly limited when compared to having a team like ACI Motorsports for car setup and support,” Edge said. “Most importantly, Curt and his mechanical team led by John Memmer know race cars and provide first-class service.”

Edge started tagging along with Swearingin to different races within the Trophy East series as a DE driver and gained valuable knowledge from ACI Motorsports and its primary coach – professional driver Cass Whitehead. He even got the opportunity to drive Swearingin’s GT4 Clubsport at VIRginia International Raceway in June.

“The GT4 felt as if it was glued to a train track around corners,” Edge said. “Without even pushing the car – after all it wasn’t my car – I remember running a 2:02 lap at VIR by the second lap; not as fast as the race pace for the Trophy East drivers, but a decent lap nonetheless.”

The rookie driver got a call in summer 2017 about buying a 991 Cup car for the newly formatted Trophy East Series in 2018. With ACI Motorsports’ help, Edge used the PCA Club Race event at Daytona International Speedway in October 2017 as his rookie platform races for the provisional competition license. Edge competed successfully in PCA’s GTC 6 class in his 911.1 entry.

Edge said his goal for the 2018 season is to have fun and finish the season with everyone safe – including the cars.  He’s most looking forward to iconic Road America in Elkhart Lake, Wisconsin and experiencing Monticello Motor Club, a private country club track, about 90 minutes from New York City.

“As a newcomer, I am looking forward to honing my driving skills in a competitive yet respectful and safe environment,” Edge said. “I’m also looking forward to meeting new drivers who have a passion for cars and racing, and working with my friends at ACI and learning from our pro coaches – Cass Whitehead and Andrew Davis.”

The Roswell, Georgia native is married to his wife Laura and has two kids – Walker, 14, and Laurel, 12. He works as a financial adviser with JP Morgan, and is a member at the private Atlanta Motorsports Park (AMP) track where he keeps several fun race cars.

“While some may use racing as a reprieve from the stresses at work, my passion for managing money is as deep as my love for cars – and I enjoy both equally,” Edge said. “Racing and driving close to the limit forces you to only think and concentrate on what’s around you – that ‘escape’ relaxes me.”

“My love for everything Porsche is genuine. My daily driver is a Panamera GTS. I also have a 991.2 GT3 and a 991 Targa 4 GTS that my wife has all but taken over – and I can’t blame her for that! Most exciting is that the Nurburgring record-breaking GT2-RS should be in the garage in the coming months thanks to my good friends at Porsche Atlanta Perimeter.”