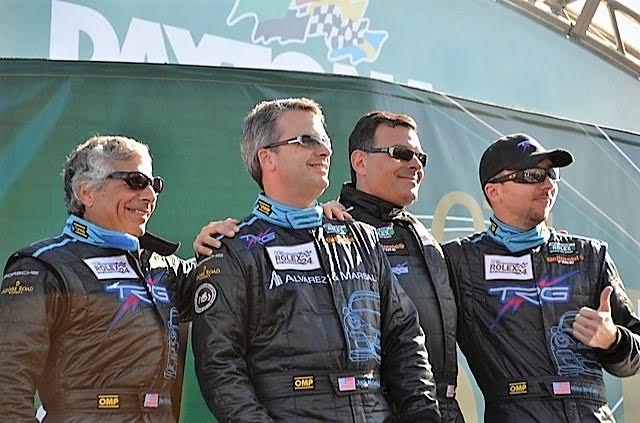 COLUMBIA, Md. (April 23, 2018) – Longtime Porsche Club of America (PCA) Club Racing member Jack McCarthy is no rookie. The 2012 Rolex 24 Hours At Daytona driver has been racing Porsches for years. But at Road Atlanta this month, McCarthy had his first career start – and win – in the semi-professional PCA Club Racing Trophy East Series with Speedsport Tuning.

Danbury, Connecticut-based SpeedSport Tuning owner and manager Spencer Cox has also been around the PCA Club Racing paddock for quite some time. The well-known, East coast sports car team usually has anywhere from four to eight cars at PCA events throughout the season.

“Jack and his cousin, Michael Marsal, came to me more than 13 years ago looking for their first dedicated race car and full-track support,” Cox said. “While they initially considered a 996 Cup, I convinced them to have us build one of the first spec Cayman race cars. This car allowed them to learn how to momentum drive before they added all the horse power of a Cup. They both learned quickly and advanced up the classes and onto the podium.”

McCarthy has participated in many different race series throughout the years, but says he always comes back to PCA and SpeedSport Tuning. He credits his friend and fellow PCA Trophy East Series competitor – Charlie Craig – for joining the semi-professional series.

“When Charlie [Craig] and West Dillard approached me late last season with the concept of bringing 911 Cup car classes to this series, it peaked my attention,” McCarthy said. “We have a great group of focused, experienced and competitive racers who have moved in to form a solid core of the new 991.1 Cup Car class in the series. With names including [Curt] Swearingin, [John] Goetz, [Rafael] Llopez, [Richard] Edge, [Gary] Jensen and [Seth] Davidow, we will never be hurting for IMSA level, wheel-to-wheel racing competition in our class. There is an amazing level of respect and comradery among this group of racers, which makes both the racing and social aspects even more enjoyable.”

McCarthy continued, “Road Atlanta is a truly historic American track, and always seems challenging for drivers and crew alike. As often is the case for the early season Peachstate PCA Club Racing event, the weather gods tossed everything at us from an overcast 40 degrees to sunny and 70 degrees, and from moderate rain to a dry track.”

McCarthy says these varying conditions at the recent event proved to be a good test for the combination of the Cayman GT4 Clubsport classes racing together with the 911 GT3 Cup classes in the series.

“There was phenomenal wheel-to-wheel racing in each class versus between classes. The ‘balance of power’ differential between these capable race cars seems quite good, allowing the classes to easily coexist, but also for closing speeds to remain very reasonable.”

As a senior partner at Alvarez & Marsal Capital Partners, McCarthy admits that racing is a huge stress reliever for him. He also credits his wife, Lisa, and his two daughters – Kathryn, 15, and Caroline, 13 – for being huge supporters of his racing campaign.

“I find that racing helps to clear my mind, reduce stress and generally resets my life,” McCarthy said. “I normally feel quite re-energized and re-prioritized going back to work following a race weekend.”

As for the 2018 season, McCarthy is focused on continuing to improve his ability to show up at a new or less frequented track and get up to speed quickly, which his coach – Grant Maiman, of Maiman Motorsports – has been instrumental in.

Ultimately, he would like to do some more top-level endurance racing. Although McCarthy favors Watkins Glen International, Laguna Seca, Nurburgring Norschleife and Spa Francorchamps are all on his list for the future.

McCarthy’s all-time favorite street car is his 2012 911 Turbo S, which he says is impeccably cared for by New Country Porsche in Greenwich, CT. He’s also excited about Cox’s recent find for him – a 1970 911 RSR that he picked up for vintage racing.

“It always astonishes me the people you meet through sports car racing,” McCarthy said. “From all walks of life, from different geographies and backgrounds, each with a common draw to the race track. PCA Club Racing and the PCA Trophy East Series are particularly attractive based on long-standing PCA team organizers, the nice balance between comradery and competitiveness, and the national nature of the series. While attending the events, I always try to pay particular attention to the race crews, event organizers and track volunteers, without whom it would not be possible to be on the track.”

“I am so proud of the cars SpeedSport has supported under Jack for so many years, but not as much as how proud I am of Jack’s continuing advancement and ability on the track,” Cox said.

Both McCarthy and Cox said in all of their years of sports car racing, their favorite memory was competing in the 50th anniversary of the Rolex 24 Hours At Daytona.

“For four gentlemen drivers in a relatively less competitive race car to be fighting it out in the top 15 positions (out of 57 GT cars) after 22 hours of racing, we were ecstatic,” McCarthy said. “Ultimately, we lost a few places following a suspension failure near the end of the race, but proudly finished in the top half of the field.  For those thinking of pro level racing, the big endurance events are an excellent choice based on the focus of consistency over outright speed.”

“It was the pinnacle of my driving career,” Cox said. “And Jack made that possible for me.”