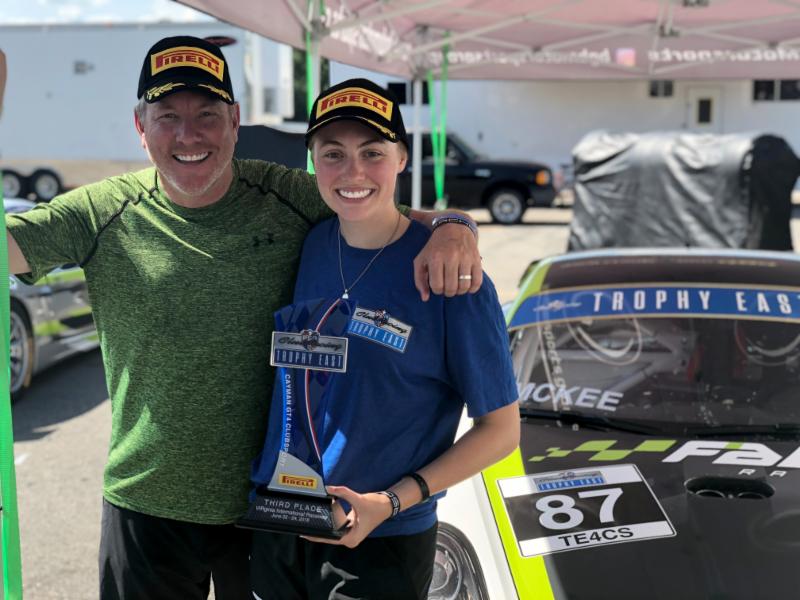 COLUMBIA, Md. (Aug. 20, 2018) – Throughout a PCA Club Racing weekend, you may see a few father/son teams, but one team in the paddock – a successful father/daughter duo – certainly sticks out. PCA Club Racing Trophy East Series competitors Sydney and Bruce McKee are taking the semi-professional series by storm this year, individually sitting in fifth and sixth place in the TE4CS class putting their car second in overall points.

The BGB Motorsports teammates share the No. 87 Cayman GT4 Clubsport MR entry, affectionately known as “Bart.” Most event weekends, Sydney races in Sprint 1, while Bruce races in Sprint 2 – the two then share the car during the 80-minute enduro races.

“As a dad, it’s hard to convey the pride I have when Sydney goes out and runs P2 or P3 lap times in her first real year of racing while showing amazing composure in an aggressive, fast-paced, stress-filled, male dominated sport’,” Bruce said. “I’m as excited before Sydney’s races as I am when I am racing myself. She is always smooth and composed on the track and takes her time learning the track. She’s much more patient than her father when it comes to that, and it’s showing as her lap times begin to creep below my own!”

Although Sydney is entering her sophomore year at Brown University, (double majoring in Engineering and Economics), and no longer lives at home, she says her bond with her dad is closer than ever.

“Racing has very much become a uniting force between my dad and me,” she said. “While a lot of kids go off to college and become more disconnected from their parents, I still have an incredibly strong bond with my parents. I get to see them more often throughout the semester because we come together at the track to go racing. It’s fairly common that I will call my dad on my walk home from class to talk about our upcoming race, our plans for the next racing season, or even our long-term racing aspirations. My dad and I have always been close – I’m pretty much his mini-me – but racing has really helped our relationship grow and flourish.”

Sydney’s mom, Wendy, is also a driving force between the dynamic duo. She’s often seen taking photos, timing pit stops, and of course, supporting the team in general. The young driver says her mom has become an integral part of their race weekends.

Sydney also says it doesn’t faze her one bit to be the sole female (and youngest) competitor in the Trophy East series. The 20-year-old said she feels incredibly supported by PCA and the Trophy East staff, as well as by everyone on the BGB team, her coach, and of course, her dad.

“Everyone has helped build my confidence, while also giving me advice that keeps me grounded,” Sydney said. “When I’m in the car, the pressure I feel is self-imposed and that pressure is to be clean, smooth and fast in order to run the best possible race. This of course isn’t always easy as I am still learning and seeing new situations in each and every race.”

“I know that the car does not recognize gender or age, and I hope and believe that neither do my fellow racers when we are on track. I know that all I can do is drive the car to the best of my ability so that is what I pay attention to when I am out on track.”

Although 2017 marked Bruce’s first year of racing, this year, his confidence of where and when to make a move on track is truly shining through.

“I think the entire Trophy East group has really upped its game this year – all the drivers are much faster than last year,” McKee said. “I have been starting each sprint at the back of the grid as a result of not driving the first sprint [since Sydney drives it] so I have to be aggressive if I have any chance of achieving the goal of reaching the podium.”

Bruce also credits the pair’s coach, Robby Foley, as a huge asset to the McKees, both as a driver coach and as a friend. Foley works closely with the team to set up the car properly and helps to build a race strategy for the entire weekend.

“This is my first full year of racing so simply gaining more seat time has allowed me to really progress,” Sydney said. “Robby really helps me focus on the little parts of my driving and break it down so that I can focus and best utilize my time when I am on track. I am constantly learning as I experience new circumstances in every race. This year, I have been especially concentrated on race craft and when and where to make passes. I know that racing is not only about going fast, but also how you manage your driving when you are in a pack during a race, so I have really been focused on putting all of the pieces together.”

A favorite shared memory between father and daughter is their first full race weekend as co-drivers at Road Atlanta. During that weekend, FaDa Racing was born.

“I think we were both a little nervous going into that race, but as the weekend progressed, we got to experience learning from one another and bonding over having some similar struggles and successes in the car,” Bruce said. “We got to experience together the comradery of the Trophy East teams, drivers and PCA staff and volunteers. It was our first time really racing together in the PCA Trophy East community, and it was the first time we worked together toward the achievement of a common goal; getting faster, trying hard to win and no matter what making sure that our Clubsport, Bart, finished in the best possible position every time he was on track.”

Road Atlanta also gave Sydney her first opportunity to rib her dad about where on track she was faster than he was, while he had his first taste of swallowing and gaining pride at the same time, Bruce joked.

“We had reasonable success that first weekend, and we walked away from the weekend with the car being in third-place in points and we were both incredibly excited for the rest of the upcoming season,” Bruce said.

Daytona Beach, Florida-based BGB Motorsports has been supporting Bruce and Sydney since Bruce first started competing in 2017.The duo credits the team for much of their success and most of their enjoyment of the sport.

“BGB is a fantastic crew with loads of experience and expertise, not to mention just a great group of people to hang out with,” Bruce said. “We sit down with the team and our coach, Robby Foley, to figure out our overall strategy for each race. We typically discuss who will start and how we want to pace the start, first half and second half of the race based on our lap times and progress throughout that weekend, as well as what we have seen as the strengths of our competitors and any opportunities we see in the field as the race progresses.”

The McKees also say they have a lot of fun in the paddock with the BGB team (along with other drivers and teams), plus enjoying the fantastic food that Justin cooks at the BGB trailer during every event weekend.

Sydney and Bruce agree that the PCA Trophy East Series has been the perfect entrance for the two to enter racing together.

“The drivers in this series are very talented, respectful on and off-track and great people,” Bruce said. “The Trophy East and PCA staff have been incredibly supportive and helpful to both of us as we have dipped our toe in the water of semi-pro racing together. In the future, we look forward to really diving in!”

Next up for the father/daughter duo is a race weekend at Road America over Labor Day weekend. The pair is aiming to gain more podium finishes and working hard to keep “Bart” in second place in the TE4CS class standings.