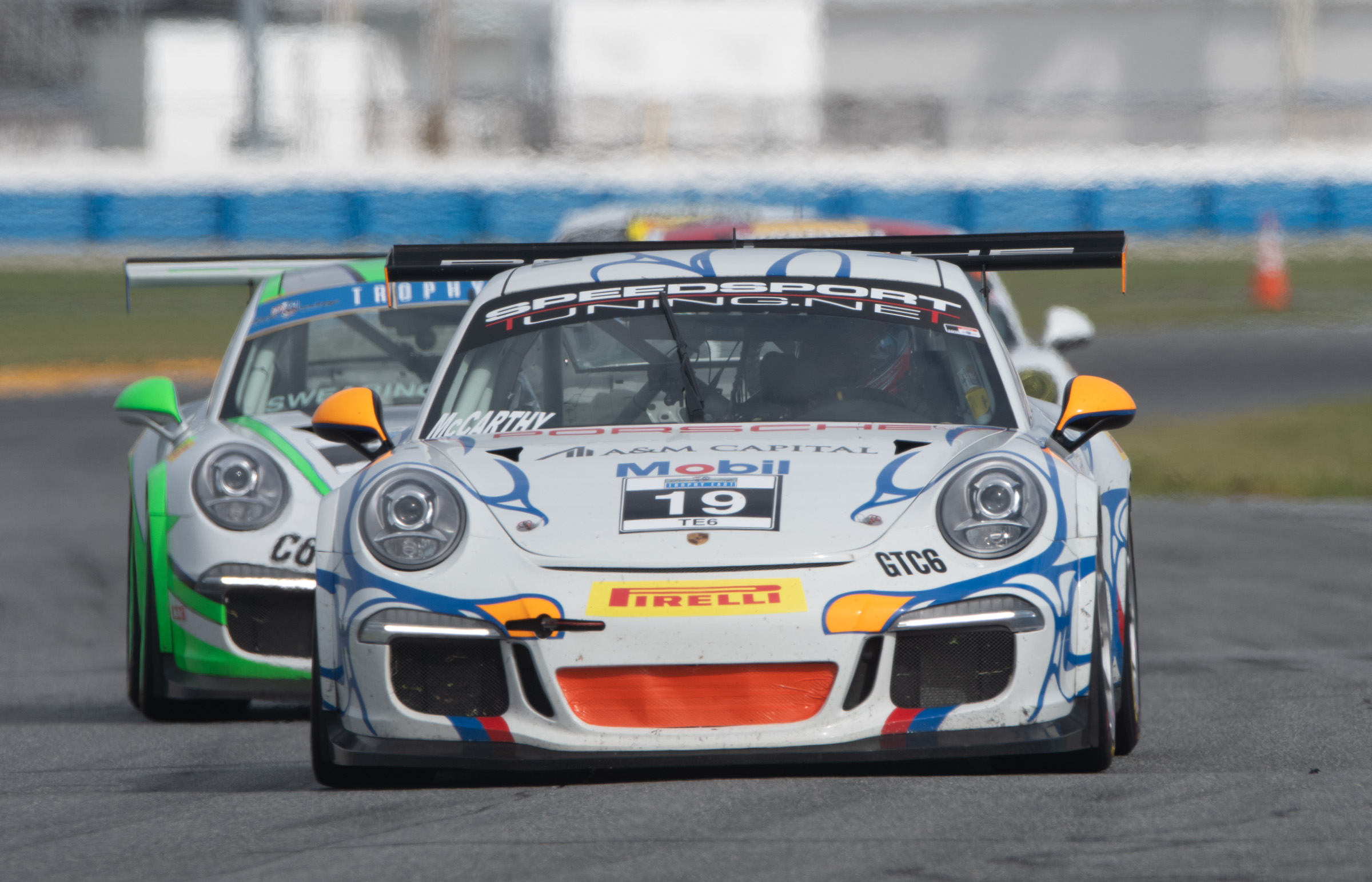 The weekend began with inclement weather, leading to an eventful first sprint. On the first lap of the TE6 15-lap race, pole winner Curt Swearingin (ACI Motorsports) and John Goetz (Hairy Dog Garage) went wheel-to-wheel into the third turn. As a result, the pair spun and were forced momentarily off of the track, as competitors raced past.

By late-afternoon Saturday, weather and track conditions improved. As with all 2018 Trophy East races, the field of cars was set by the first sprint’s results.

Pierce Racing Development’s, Gary Jensen, piloted his No. 11 TE6 Masters car to victory in class, for a second time at Daytona International Speedway.

Collingwood (BGB Motorsports Group) would win the TE4CS class for his second time of the weekend as well. With ACI Motorsports’ Castro finishing second and Russell Walker with TOPP Racing finishing third.

The starting grid for the 2018 season’s final race was set by the fastest lap from the first and second sprint. For 80-minutes, all four Trophy East classes delivered the best season-finale the series has witnessed in its three years of existence.

John Goetz (Hairy Dog Garage) would start first and lead the field of 17 into Daytona’s treacherous Turn 1. After nine laps of competition, ACI Motorsports’ Swearingin’s season was ended, after he experienced technical difficulties with the car.

Hurt, Castro, and Collingwood would also not finish the season-finale. ACI Motorsports’ Richard Edge was disqualified following an accidental fuel spill during his pit stop.

Goetz would ultimately win the session, from the pole-position. McCarthy and Davidow would finish second and third.

Having not competed in either sprint races, Ken Finch (TOPP Racing) finished second, overall and first in the TE6 Masters class. NOLAsport’s John Crosby swept the weekend, repeating another 1-2-3 finish in the TE4CS Masters class.

At the conclusion of the event weekend, the Trophy East Series hosted their end-of-season banquet in the 500 Club at Daytona International Speedway. The guests were treated to stories from legendary racer Brian Redman, and the series’ organizers presented 2018 season awards to the competitors.

The awards, not only marked the end of the 2018 season, it also marked the ‘changing of the guard.’ Current Club Racing Chair, Vicki Earnshaw, will step-down at the end of the year and the current series coordinator, Weston Dillard, will assume the chair position.

The final season standings are as follows: